Karl is the Master Franchisee for Bricks 4 Kidz in Ireland

Bricks 4 Kidz is an internationally renowned children’s enrichment franchise which currently operates in over forty countries. The education franchise provides a fresh and fun way for kids to learn the fundamentals of Science, Technology, Engineering and Maths (STEM) by using LEGO® bricks in an imaginative and stimulating way. Their programmes are built around their proprietary model plans, with exciting themes that are relevant to children’s interests, all of which have been created by engineers and architects. Bricks 4 Kidz believe that children learn best through activities that engage their curiosity and creativity.

Speaking about his decision to invest in this brand Karl said “I closely monitor international trends in the education sector and two areas that have emerged recently are the increased focus on teaching STEM, along with the need for creative and play based education. Bricks 4 Kidz stood out as a business that combined both of these elements and has already achieved phenomenal success across the globe”.

Ireland’s first Bricks 4 Kidz creativity centre opened in Wexford town in July 2015 and today Bricks 4 Kidz is operating across 15 counties across Ireland. A further three franchise locations will be awarded during 2022.

Many franchisees are entitled to an income tax refund of up to 41% of the capital funding that they invest in a Bricks 4 Kidz franchise under SURE (Start-Up Refunds for Entrepreneurs). Franchisees may secure a refund of PAYE income tax that was paid over the previous six years.
The potential of Bricks 4 Kidz has been recognised by both Dragons’ Den investor, Gavin Duffy and Financial Advisor, Eddie Hobbs. On 1st February 2017, Ray D’Arcy revealed that LEGO® is now the world’s most powerful brand. Ray praised the therapeutic benefits of LEGO®  and said in his view that it’s equivalent to mindfulness and meditation. He went on to say that “if somebody was to set up some sort of place where you go and just build LEGO® all day, you’d get good results. 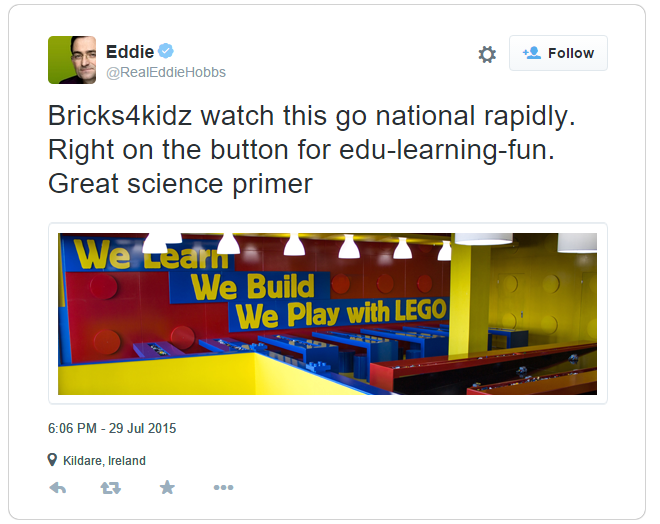